Ground on ground, staining, rubbing, washing, printing, wiping, rinsing, ironing. These are the processes of my training and my inclination. They are continuously used and adapted in a dialogue with the land. Place and placelessness shift and slide as I deal with colonisation and dispossession. The land holds the traces of the past, glimpses are given, knowledge is gained and the dialogue continues. The archaeologist John Mulvaney once said that an inspirited landscape was one of the greatest gifts given to us by Indigenous people. My work aims to find a ground where this is respected across all cultures who share the land. 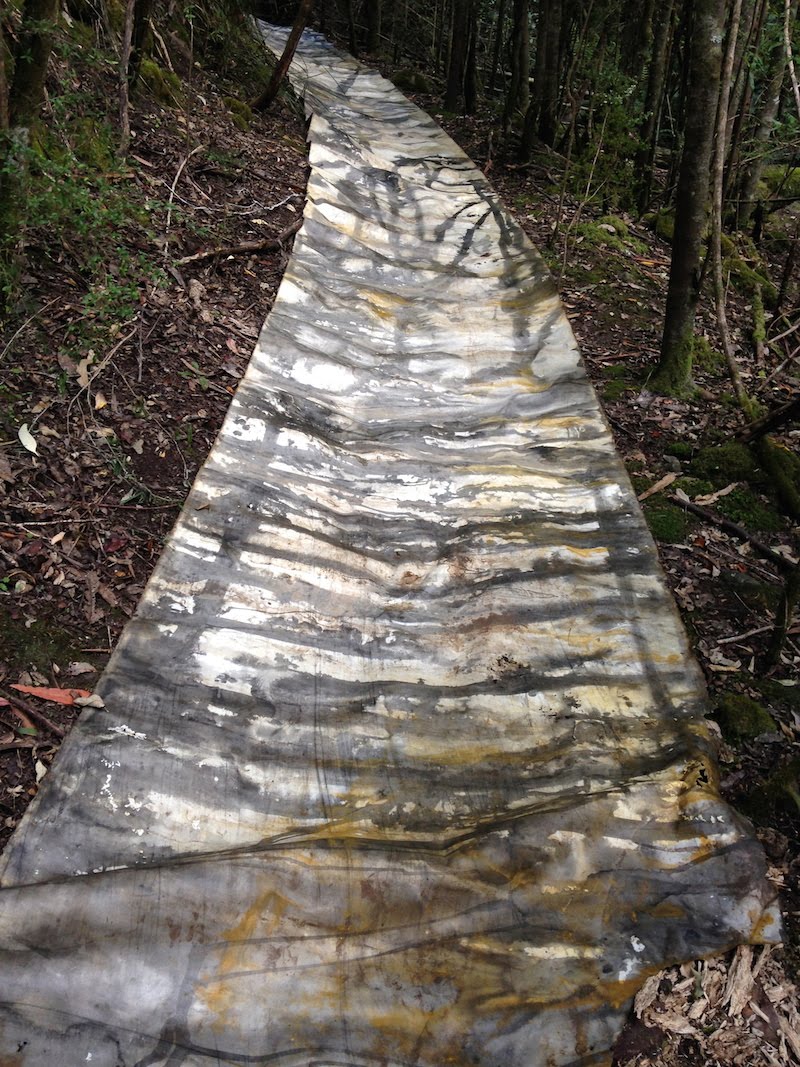 As I walk the track each week I collect materials that are scattered and dislodged.  From the twigs, leaves and barks I boil up an ink that ranges from a light golden colour to a darker syrup and from the ochres I grind them up into a powder and mix them with water. The environment I walk in is not only the land beneath my feet it is also the pressures beneath that surface, the cycles of death and decay, the other inhabitants, human and non-human, my biological responses intertwined with my cultural affinities.

On one side of the tack is Cartwright Creek making its way down to the Derwent River nearby and on the other side is the Dolerite rocks resisting the erosion at a slower pace.

The ochre colours are surprisingly similar to some of the rock faces in the Kimberley, although they are hidden beneath or are seeping out from the dominating grey rock.
As I bring the membrane back each week I gradually add these layers of colours.  When the red ochre is isolated and ground up it becomes a dominating force and I pause in my application and start to walk it over the paper.

Whilst the red ochre was applied for its material links to the site, it has an unnerving resonance reminding me of the horrific history of this land.  The track is named in memory of a Nuenonne woman, contentiously called the last Aboriginal Tasmanian. At the pinnacle of the walk is a memorial where you can look over the Derwent River to Bruny Island where Truganini originally lived and where her knowledge base came from.

I place my roll of imported European paper in the land to act as a membrane between land and culture, acquiring a memory of past events through the matter of the environment.  Its porous nature shifts from its cultural tradition as a neutral receptor of representation to a memory of the interactions between multiple differences, cultural and material. In working with art as a membrane of memory my aim is to allow a continual performativity where memory brings forward the past to imagine a better future.

As I look at the marks, the red ochre becomes too opaque, obliterating the marks below, so I place the roll in a large tub, gently washing the paper.  Through this the materials are taken off the surface but stain and seep into the membrane.

Membrane of Memory: the Track

Membrane of Memory explores a site on Mt Nelson in Tasmania.  It is called Truganini Track in commemoration of a significant Aboriginal woman in Tasmania.  I continuously revisit this site that follows Cartwright Creek, a meandering stream dotted with waterholes. Once again I take a roll of Rives BFK out to the site in order to learn about the many layers of history embedded in the land and also to find where I stand in this place.

In Western terms we don’t ‘see’ the ground, only the marks and meanings placed on it.  On this ground, western tradition dictates that to see anything a mark needs to be made. This mark becomes a ‘figure’ on the ground, bearing potential meaning.


Our visual conventions and our will or desire to see form, separates the mark from the ground. This becomes the ‘significant’ figure and the ‘insignificant’ ground.

To shift away from this structure and dichotomy I have started to consider the paper as a membrane to allow for a porosity between materials and meanings. The material brings its history and lies on the ground retaining traces of geological history.
This interaction between the membrane shifts the work away from ‘perception’ and our knowledge of our place in the world, where our eye in our vertical body links directly to our brain and into ‘sensation’.  I am being pulled into the horizontal field of the ground and begin to learn of the many different operations that occur in the world around me.

By placing the paper directly on the land I use it as a mnemonic device to record the traces of events above and below the surface.  My aim is to test the ground and the materials to address the psychological depths of settler Australians, to see if I can further understand what I have grasped from the work of Aboriginal Australian Art and implement it in a new visual language.

The material of the paper takes on further meaning through stains and marks above and below the surface. The ground of the paper loses its neutrality, its passive acceptance of meaning, and becomes active in the forming of meaning. 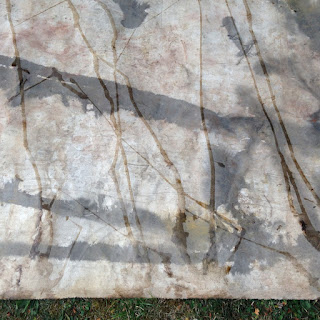 I continuously revisit the track over weeks, bringing the roll with me to acquire new layers. The realm between track and trees that I walk though has its own atmosphere, its own conditions and its own history that can be glimpsed and pondered on as I travel through.

The track is where I am gaining knowledge, it is both the testing ground and the source of the knowledge. The anthropologist Timothy Ingold writes about the track as an integral part of our knowledge base, it is the many paths we travel that we acquire experience and gain insights.  He points out that as we walk we are also in the world that surrounds us.  The weather influences the ground we walk on, and as we walk we breathe with every step, we walk in both “the air and the on the ground” He writes “This walking is itself a process of thinking and knowing.  Thus knowledge is formed along paths of movement in the weather world.”Ingold 2010 p. 12


In order to acknowledge the membrane quality of the paper, I begin to work on both sides of the roll.  The paper becomes transformed by the materials that become ingrained from either side.  I use yellow ochres along with red ochre, charcoal and eucalyptus ink in response to the glimpses of earth I see below the surface.

I am beginning to become more aware of the histories embedded in this land.  It is so rich in its fossils, revealing the land's geographical formation.  But there are also a myriad of tracks revealing the wealth of fauna that use the track when I am not present.

Jan Hogan
As an artist and educator I am interested in how difference can occupy the same space with respect and acceptance. My interest was initially in cross-cultural dialogues about sharing the land, but as I delve more into the material and psychological depths of what it means to be ‘in place’ I realize my dialogue is with all elements of the environment. Paper is my primary method of exploration whether it is in site-specific drawings or in printmaking. I use it as a membrane of memory to record the marks and traces left on us by the land.